Wonder Twins Are Back and Officially Part of the DC Universe

The Wonder Twins first debuted in the classic ’70s Hanna-Barbera cartoon The All-New Super Friends Hour. After 40 years, this superhero duo is back and almost every misunderstood teenager can relate to their powers.

The twin brother and sister, Zan and Jayna, from the planet Exxor return as a six-issue comic. The Wonder Twins are part of DC’s teen-focused Wonder Comics imprint. The twins have the power to transform into any animal or water-based form, but this time they are interns at the Justice League’s Hall of Justice. Nevertheless, they have to cope with shyness, overconfidence, personal humiliation, and supervillains.
Mark Russell wrote the title and he recently shared that he felt a strong connection to Wonder Twins and that Super Friends was his favorite cartoon when he was a child. He immediately accepted to work on the title when Brian Michael Bendis approached him at a comic con.

According to Russel, it’s great how young these superheroes are that it’s acceptable that they are goofy and not on top of their game. So, the title is all about exploring how the duo will fit in a new high school and on a new planet. However, the title features plenty of humor. 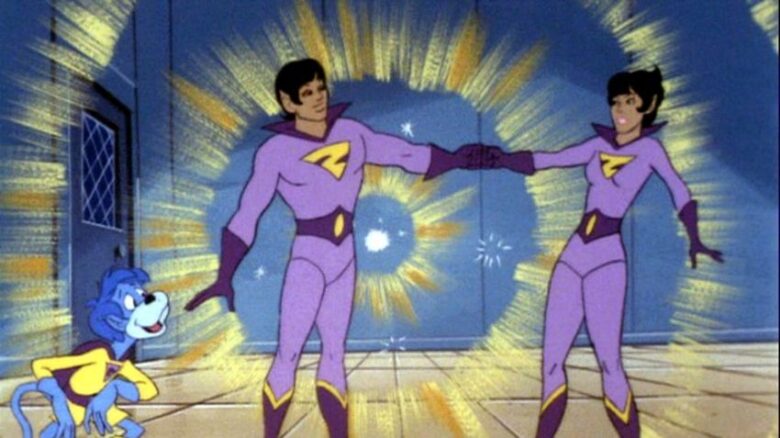 The Wonder Twins, Zan and Jayna, are outsiders whom the readers first encounter at Morris High School in South Metropolis. The brother strives to impress ladies, while Jayna is shy. Stephen Byrne’s art brings their world to life by implementing a style that feels like a Saturday morning cartoon with complex nuance underneath. Zan and Jayna connect with Batman, Wonder Woman, and Superman at the Hall of Justice.

The workplace environment for these heroes are the headquarters, where they can complain about getting assigned a task better suited for another meta. This is the place where we see lots of honest and funny human moments. Zan goes through an embarrassing situation and school and ends up having an unwanted name. So, while the other heroes have to deal with major world threats, the twins have to figure things out on their own. Thus, as they have limited superpowers, they can confront the evil counterparts of themselves.

There are also villains which are not quite ready for the Legion of Doom. The villains are called the “D-League of Super Villains, The League of Annoyance,” which use an abandoned toy store as their headquarters. But just like the Wonder Twins, no one takes them seriously. One of the villains is Drunkula, who is an alcoholic vampire.

Through the interactions with the villains, the use of the Wonder Twins’ powers is brought into question. The writer shared that he focuses on the world around him when writing the story and highlights how Zan and Jayna perceive the menial ways justice is pursued on earth.

The book comes with plenty of action and a supervillain joins the League of Annoyance. Even though Russel couldn’t explore the reasons the twins had to leave Exxor in the first place, he hopes there will be another six-issue arc to do so.

The writer doesn’t only have fun with the story and the superhero duo, but add plenty of seriousness. He believes that these characters should be taken seriously. Even though we cannot know whether the Wonder Twins will ever become part of a mega-franchise, the story teaches us a very important thing. Everyone is capable of greatness in their own way with their unique powers and thoughts, and thus, we should all be careful who we don’t take seriously.

O.C.A.D. Music – A Talented Duo Emerging In The Music Industry